Devon, Pa. – Sept. 29, 2022 – The stage was set for the highly anticipated Sabine Schut-Kery Masterclass, presented by ShowPlus powered by CaptiveOne, on Thursday evening, welcoming the Olympic silver medalist and a roster of six horse-and-rider combinations to Dressage at Devon’s Dixon Oval for an evening of educational sessions. Throughout the night, the common themes were encouraging movement in front of the leg, prioritizing relaxation, and helping the riders simplify movements for their horses of all ages.

First in the arena was Silva Martin with Farouche, (Foundation x Cosmos Girl), her own 4-Year-Old Westphalian mare. Sabine quickly assessed Farouche’s movement through some trotwork, referencing its elegance and elasticity. She wasted no time in getting Martin and Farouche connected through the bridle, asking her to bring Farouche round for more self-carriage. The pair proceeded to some serpentines and rhythmic changes, beginning to engage the hind end.

“As she comes into her five year-old year, I would get her a little more engaged in the hind legs,” remarked Schut-Kery. “Teaching her that a little leg or whip doesn’t mean go faster, it means more engagement in the hind legs.” After working through some leg yields and achieving more suppleness, Martin and Farouche moved onto canter work. “Next thing she has to learn for next year is counter-canter,” said Schut-Kery. “Ride with the leg into a suppling rein – from a circle, go across diagonal to opposite long side and continue on that lead to have her practice working towards counter-canter.” Now more responsive to Martin’s aids, Farouche came round nicely, with significantly more flexion through her back and finished off the session with an expressive, stretchy trot. Schut-Kery reminded Martin to help keep the stretching trot balanced by sitting as straight as possible while encouraging as much forward stretch as she could to help Farouche lengthen over her back. She noted that it was of great benefit, especially with young horses, to add stretching trot into a ride periodically to ensure the back stays supple and open.

Next in was Olivia LaGoy-Weltz and Johnny Be Goode (Dream Boy x Amazing Grace), an 8-year-old KWPN Gelding. Schut-Kery got the pair right to work with some leg yields, asking LaGoy-Weltz to apply more leg at the girth and get Johnny to come round. “Do a long yield when he gets tense so he lets you access his hind legs,” instructed Schut-Kery. “Sometimes, along the wall they can feel stuck – do it in a wider space. Ride for more power. Make sure it doesn’t end up in the reins, but that you teach him to take the weight.”

After balancing both sides, the half-pass was incorporated. “Ride him straight along the longside, but bring his neck inside a little bit. Hold more snaffle than curb in that exercise.” In canter work, Schut-Kery observed Johnny’s tendency to over-sit and get behind the aids. “If he doesn’t want to travel anymore and not go forward, let him out and forward for a moment. Now get him in front of you.” This piece of advice helped the gelding’s pirouettes stay more forward, as he had a tendency to over-collect at times in the movement. Schut-Kery instructed LaGoy-Weltz to use transitions within the canter to get him more forward thinking.

Felicitas von Neumann-Cosel and Fantastico (Perito x Platina, Opus 72), a 12-year-old Lusitano stallion, were next to work with Schut-Kery. The pair started with canter work, and Schut-Kery pointed out the stallion’s correctness in the neck and in the snaffle as he went around the arena. She encouraged Neumann-Cosel to help give him more confidence by adding a bit of lower leg.

Schut-Kery instructed her to work on smaller circles at times to help with keeping the stallion’s legs in the turn so he didn’t have an opportunity to run forward and away from her inner leg when she applied the aid before performing a movement. “You want to use the opportunity to push them through the body from the rider’s leg,” she said. “The horse has to take more weight in the hind in a smaller circle, helping them build strength, but you must keep leg on.” Next moving into a half-pass in canter, Schut-Kery reminded her to stay committed to a baseline canter rhythm in all of her movements, always with an uphill mindset. The pair worked on tempi changes on a serpentine before moving on to pirouettes. She was again reminded to keep a consistent rhythm in the canter, going only a little slower to allow for the natural shift in weight to his hind end.

Neumann-Cosel then focused her attention on the piaffe work, which Schut-Kery helped her to think of in a more simple way. They practiced going from a working trot, to a piaffe, and back to a working trot, while giving Fantastico plenty of time to slow his pace in a calm way but keeping the same rhythm. “You want them to think of the piaffe as just a trot in place, not as a trick,” Schut-Kery said. The pair worked on several trot half-passes and finally a long, stretching trot before wrapping up their session. Schut-Kery remarked that by Neumann-Cosel focusing on helping the stallion keep energy rolling and flowing more through his body, it would help with keeping him more in front of her leg.

Alice Tarjan and Summersby II (By Sezuan), her own 7-year-old Oldenburg mare, were next to ride with Schut-Kery. The mare started quite tense in the arena, which caused a bit of tension in her neck. To help with this, Schut-Kery encouraged her to keep her hands down and forward just a bit to allow her to work more independently from them, riding several 15 meter circles and transitioning from a fluid trot to an extended walk. With the mare now slightly more relaxed in the work, they moved on to canter half-passes with forward motion in mind. Schut-Kery cautioned Tarjan not to let Summersby II’s haunches come in too much in the movement, but noted that the lateral movement had helped relax the mare and encourage her suppleness.

The combination worked on walk pirouettes before moving to canter pirouettes. When Summersby II became a bit too tense in the pirouettes, Schut-Kery asked Tarjan to open up the movement to almost a 10 meter circle, letting her go more forward in the exercise. “Take the time to get the tension out instead of putting the movements on top of the tension.”

Jim Koford and Adeline (Maxwell Von Donius x MGR Miss Scotty), a 12-year-old Friesian Sport Horse mare, were next to go in the order. The mare started off quite tense in the big atmosphere of the Dixon Oval, and Schut-Kery encouraged Koford to keep the mare thinking by working through transitions, changes of direction, and focusing on lateral exercises. As Adeline’s conformation made for a neck that became short at times, Schut-Kery was very complimentary of Koford’s giving hand and confident seat that helped encourage her to go forward. “Relax the rein a little bit but don’t throw them away,” Schut-Kery reminded him. A long posting trot while encouraging as much stretching as possible helped Adeline acclimate to the environment.

The pair worked on several walk to canter transitions and some trot half-passes before winding down into a rhythmic stretching trot to cool down and end the session on a positive note. “Having a clever floor plan means you’re preparing better and thinking ahead of the horse, and that eliminates mistakes,” Schut-Kery said “It’s harder to get her back on the aids if she’s already off of them. You only have a chance to get away from the short neck by having more leg to help her move from behind.”

Jaimey Irwin and Simsalabim (Sir Donnerhall 2 x Akzent 2), a 10-year-old Oldenburg mare, were last in the order. Like many of the other horses seen in the class, Simsalabim came in quite tense. “I like that Jaimey’s leg is active and on, but not too much,” remarked Schut-Kery when she observed how he handled the hot horse. To keep the cadence and create a nice extended walk, Schut-Kery had the pair work on half-passes and serpentines to create more balance. “Be careful to not push her away from you in the walk. Let her first go slow and open and swing more in the back, then go forward.” Here Schut-Kery emphasized the importance of the walk, saying “I try to make the walk correct every time, like I’m in a test.”

Trot and canter work focused on opening up Simsalabim’s back and engaging the mare’s hind end. To create a more supply topline and spinal flexion, Schut-Kery instructed Irwin to ask Simsalabim to stretch forward and down. “The back opens up if the neck comes a little forward.” Once more adjustable, Schut-Kery worked Irwin through medium trot to piaffe, testing Simsalabim’s self-carriage and weight placement in her hind end. She encouraged Irwin to slow the trot until Simsalabim was in half steps, while not losing control of her hind legs. “More on the hind legs,” encouraged Schut-Kery, “have her take the weight.” Simsalabim, now more collected and suspended, was rewarded with a walk break before moving into pirouettes. “Make them bigger first,” instructed Schut-Kery. Through the swinging transitions, Schut-Kery reminded him to not let Simsalabim fall onto her inside leg, telling Irwin to make her wait.

Schut-Kery wrapped up Irwin’s session by complimenting his subtle but effective aids, and the pair’s great partnership that was sure to serve them well. As the last combination of the night had wrapped up, she thanked all of the riders for bringing forth each of their diversely talented horses for the audience to watch for a beautiful evening of dressage at the historic event. 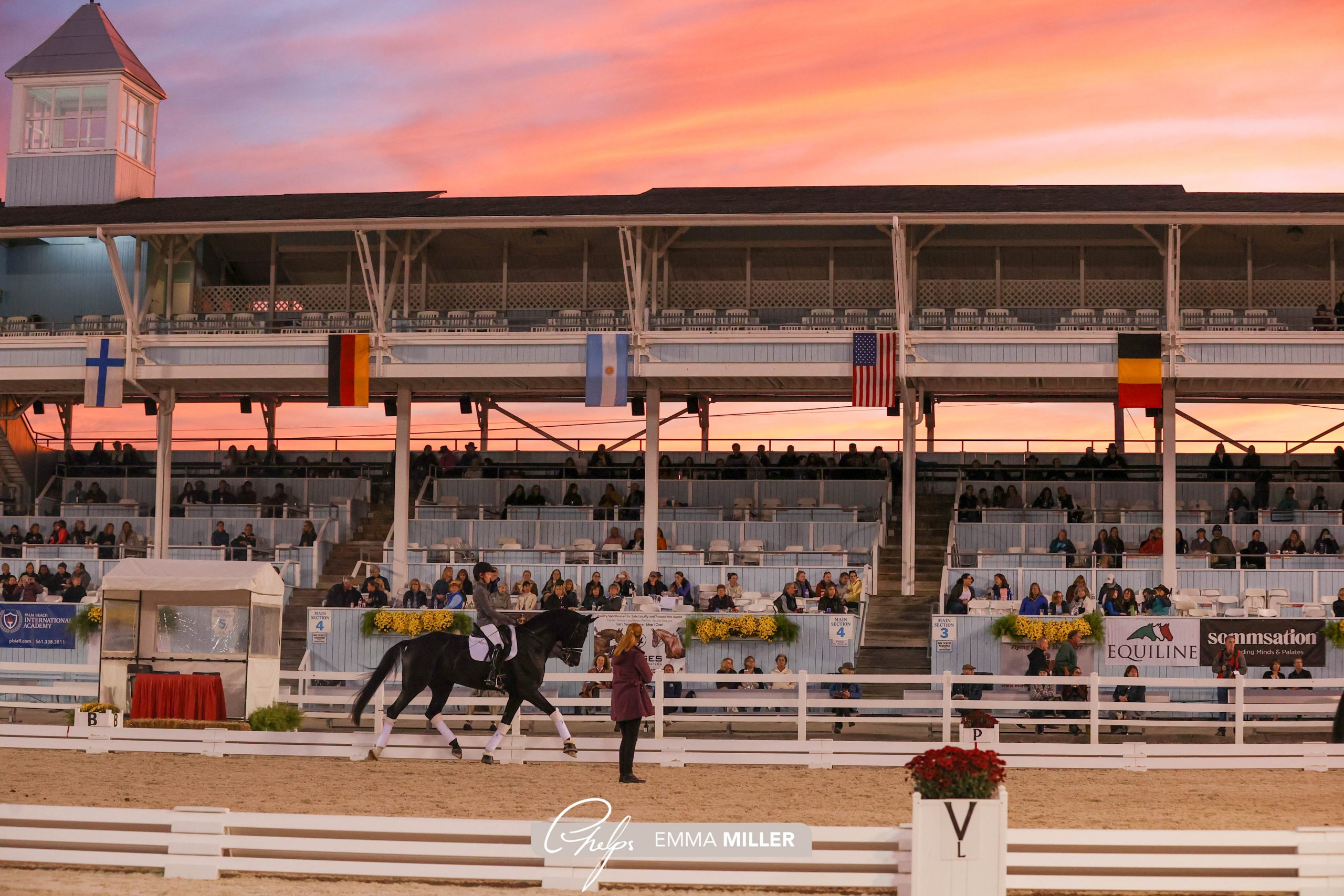 © All Rights Reserved 2022.
Dressage at Devon is a registered 501(c)3 non-profit organization.